skip to main | skip to sidebar

There is a campaign to "blue out" the stadium for the first game:

Some key tidbits from the article:

* Field Level Club seats are priced at $60,000, $50,000 and $40,000 and roughly half the field level seats have sold. Roselli said fans aren't doing anything different from they've always done other than making a long-term commitment.
Posted by Erin at 9:40 AM No comments:

"Now that Fox Sports Net has made its selections for Pac-10 games this season, we have a good skeleton of the schedule. FSN picked up seven games in its initial selection process for its national broadcasts, and no Cal games were involved. But that doesn’t mean Cal won’t have some of its games aired on FSN eventually.

Washington announced that the game against Cal on Dec. 5 at Husky Stadium will air on FSN Northwest and begin at 3:30 p.m.

Comcast SportsNet Bay Area, which carries some FSN programming, could pick up that Washington game. Or CSN California, which holds exclusive regional rights to Cal sports, could produce its own broadcast if it chooses to do so. Right now, Cal is in discussions with CSN California to see which games it might be able to telecast.

The only games CSN California could pick up before the season are the ones at Washington and Minnesota and at home against Eastern Washington. The rest would first be subjected to the 6/12-day window. Seeing as Cal is considered one of the top contenders in the Pac-10 this season and should begin the year ranked in the Associated Press top 15, it’s a good bet that many of the Bears’ games will be selected by one of the networks as the season goes along.

The situation for the Minnesota game probably won’t be decided until next month. The Big Ten is expected to announce a start time and local TV arrangement for the game in July. Then Cal will see about how it can get the game on locally here."
Posted by Erin at 10:02 AM No comments: 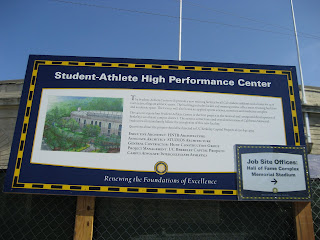 Today I visited Memorial Stadium, chatted with a football buddy of mine, and took some pics! 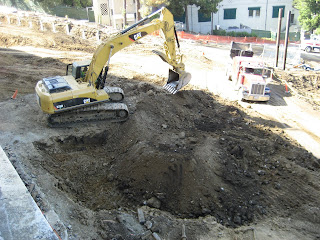 Big holes are being made. 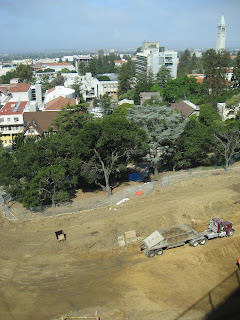 From the top of the stadium, pretty cool.
Inside fact - Cal was planning on keeping that tall tree Dumpster Muffin had taken habitat in, but had to cut it down because of the damage the tree-sitters inflicted. Isn't it ironic? 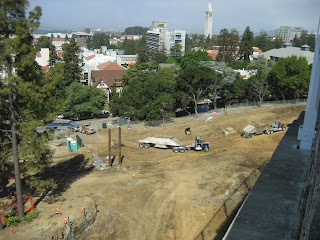 A pretty good look. They are going to install 4 huge exhaust fans on the west side of Memorial (on the insistence of the UC Regents) in case of a fire the air can quickly get out.
Also, they will build huge metal bars the vertical length of the stadium to "hold" Memorial from completely falling over / crumbling to the ground in case of an earthquake. 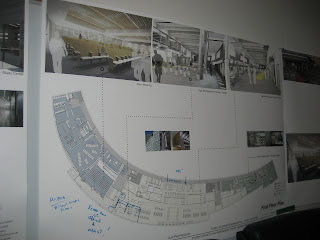 The first floor (bottom floor) plans including a picture of the presentation room (top left - although possibly with wider seats), weight room (top center), and weight room with the dining room overlooking it. 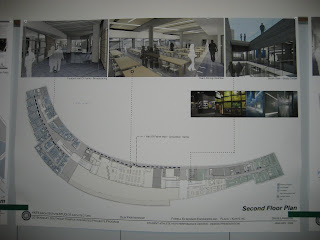 The second (top) floor plan including a picture of a hallway (top left), the dining area (top center), and the view from the plaza looking down the stairs going into the performance center (top right). 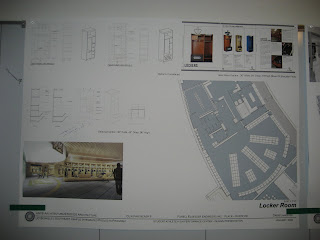 The locker room. They will go with the dark finish of the lockers.

And for those band folks out there, they are installing some arch metal beams in North Tunnel so that doesn't crumble onto poor band members. They will be able to storm out of North Tunnel as per usual, but they won't be able to hang out there while waiting to do so. Where will they wait? TBD... (my guess - inside the stadium in the endzone.)

Here is a link to a short video I took:

The following is the amount of money each Pac-10 team earned from TV revenue in 2008. Note that Cal earned nearly $1 million more than stanfurd! If you’d like more information, go here: http://seattletimes.nwsource.com/html/sports/2009256167_uwmoney24.html. Note part of the reason Oregon State did so well is that the Beavers had a road game at Penn State (seating capacity 107,282).

Some times for 2009 Cal Football Season

Yes, I believe the 10pm EST time for the Maryland is payback for the 9am PST game last year! :)
Posted by Erin at 11:10 AM No comments:

I know it's been awhile since I've posted, but I thought this was interesting enough to post. I am "stealing" these words verbatim from Steve Harris '93 who attended a presentation about the new Endowment Seating Program (ESP):

Ø The playing surface at Memorial will be lowered three feet to improve existing sightlines.

Ø To accommodate the 3,000 renovated seats, Memorial’s capacity will be reduced to about 63,200 people (Cal’s home attendance has been in the 62,000 range recently).

Ø The current plan involves Cal playing at Memorial for 2009 and 2010, but NOT 2011. The current hope is to host games at the Oakland Coliseum in 2011, but a deal is not in place yet… I sense Candlestick Park would be the backup plan, if an imperfect one, and I don’t sense that AT&T Park is a possibility at all. It’s going to cost a lot of money to rent out whatever place Cal’s going to need to rent out and we don’t have leverage.

Ø Evidently the City of Berkeley has informally said that it will not participate in a lawsuit about the Memorial Stadium renovation, which would mean that the Panoramic Hill Association (or whomever else) would have to post a bond to file such a lawsuit. Approval from the UC Regents should come this year and any lawsuit would need to be filed shortly thereafter.

Ø TIMELINES: the current working date for the opening of the Student-Athlete High Performance Center is Spring 2011. The current working date of the renovation of Memorial is to start in 2011 and that it will take one year. This appears to be an aggressive, optimistic timeframe for such a renovation. Then again, if the SAHPC exists in 2011 and there’s sufficient momentum on the Memorial renovation that it’ll take another 6-12 months to finish, who’s going to care?

Ø Timelines and lawsuits: this time Cal is prepared. The timeline of any lawsuit will fit neatly within the time period for the SAHPC to be finished. So if there is a lawsuit and it takes 1 or even 2 years to resolve, Cal’s timeframe to renovate Memorial isn’t affected at all.

Ø What’s the problem, then? IF there is a lawsuit, it’s going to be about the amount of money Cal can spend on the renovation. Under current law, the amount of money one can spend to renovate a stadium is capped at half of its value. The law isn’t clear about which is the best method to use in obtaining such a valuation. The endgame is this: the Panoramic Hill people would argue that Memorial sits on the Hayward Fault and it’s been crumbling for 75 years and it’s worthless, so Cal can’t spend any money on renovation. Cal of course says this is the greatest place on earth to watch a football game and it’s worth $600 million, so $300 million can be spent to renovate, and what do you know, the project is set at $300 million. Due to the lack of clear case law on the valuation issue, it’s in Cal’s best interest to smooth any ruffled feathers and avoid litigation. Hopefully everyone’s so exhausted (emotionally and financially) from the last go-round that nobody’s interested in seeing a courtroom again.

Ø How does Cal pay for all this? The 3,000 seats in the ESP program are expected to raise enough money to finance the renovation and all 27 sports in Cal Athletics going forward. What if the economy’s terrible enough that 3,000 people don’t buy in? Here’s the rub: it’s not 3,000 people that need to buy in… it’s realistically about 1,200, since most people will buy 2-3 seats in the program. They’re at 25% capacity now and really need to sell about 90% of capacity by the time the stadium renovation is complete (i.e., 2012 or 2013), NOT this summer, when the letter of intent period ends. So the bottom line is that Cal needs 1,000 – 1,200 new accounts to be initiated in the next three years for this project to work. Will it work? We’ll see!

Erin
I'm a UC Berkeley alumna, class of 1997 with bachelor degrees in Applied Mathematics and Statistics. I was in the Cal Marching Band for 5 years and Drum Major for the 1995 season. I am currently the Alumni Band Drum Major. I started working for the California Alumni Association in April 2004. I organize the away game football tailgates, home hoops parties, and our Alumni Groups (clubs) program of 90+ groups. Go Bears!